Hiroshima City, the capital of Hiroshima Prefecture, lies in the southwestern region of Japan. The population is about 1.2 million, making it Japan’s 11th largest city. Hiroshima features mountains on three sides, while the fourth faces south toward the Seto Inland Sea. Six rivers run through the city center, so the city has a lot of bridges.

Hiroshima literally means “broad island.” About 600 years ago, there were several islands here. The Mori Clan built a castle on the largest of them about 400 years ago, and the town was born.

However, Hiroshima was completely destroyed by the atomic bomb on August 6th 1945.

Around 140,000 people died due to the bombing by the end of the year. And some survivors still suffer from the aftereffects of the atomic bomb today. Every year on August 6th, the City holds a Peace Memorial Ceremony. Many people from around the world attend this event. 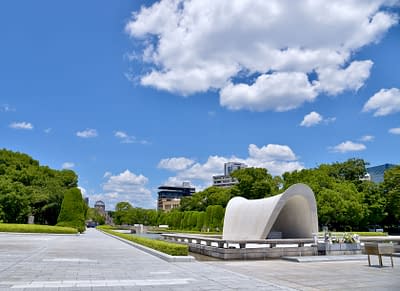 Peace Memorial Park contains around 70 monuments to the atomic bombing, as well as several facilities dedicated to peace education and peace activities. Before the A-bombing, this part of the city was the busy downtown hub of Hiroshima. There were stores, inns, theaters, and restaurants. The people living here enjoyed happy and peaceful lives.

On August 6th, 1945, the City of Hiroshima was completely destroyed by a single atomic bomb — the first ever used on humankind. Most of the people exposed to the bomb here died, since this area is so close to the hypocenter (ground zero).

After the war, Peace Memorial Park was constructed where the bustling heart of the city once stood. It expresses our sincere desire for lasting peace in the world. 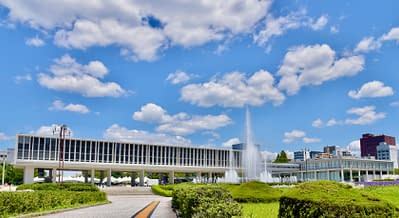 Hiroshima Peace Memorial Museum shares information about the reality of the atomic bombing. Its collection includes thousands of artifacts and photographs, as well as eye-witness testimonies and drawings made by A-bomb victims. It opened 10 years after the atomic bombing and it consists of two buildings; the East Building and the Main Building. The East Building renewed its exhibits in 2017. The Main Building in 2019.

The East Building focuses on Hiroshima’s history, and displays material about the danger of nuclear weapons. Video testimonies of A-bomb survivors are also available for viewing here.

The Main Building displays personal belongings left behind by the victims, photos, drawings, and other artifacts of the A-bomb disaster of August 6th, 1945. 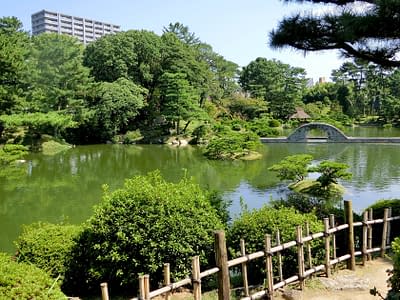 Shukkeien is the most popular Japanese garden in Hiroshima. The name means “miniaturized scenery garden.” It used to be called “Sentei” garden. The samurai and tea master Soko Ueda designed the garden about 400 years ago. Three teahouses grace its premises.

Shukkeien is located 1.2 kilometers away from the hypocenter of the atomic bomb. The bomb devastated almost everything here. Many people evacuated to Shukkeien immediately after the atomic bombing to escape the fires. Dense forests covered Shukkeien before the bombing. 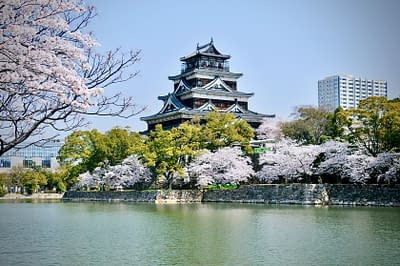 The Mori Clan built Hiroshima Castle about 400 years ago. At that time, it was the largest castle in western Japan.

Hiroshima Castle’s keep (ten-shu-kaku) bears the nickname “Carp Castle.” Except for the stone foundation, the keep was completely destroyed by the atomic bomb. The current castle was reconstructed with public donations 50 years ago. Inside the tower you will find a history museum with swords, suits of armor, and historical documents on display.

Within the castle grounds you can also see the ruins of the Imperial Headquarters. It was a temporary supreme military command post for the commencement of the Sino-Japanese War in 1894. At that time, many military facilities appeared in the area. 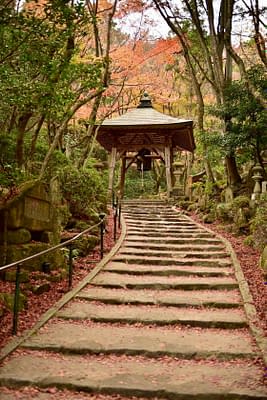 Mitaki-dera is a well-known Buddhist temple in Hiroshima where you can feel close to nature. Mitaki literally means “three waterfalls,” so named for the three waterfalls on the temple grounds. The temple was constructed 1200 years ago. Some Buddhist statues in the main hall are around 1000 years old.

Mitaki-dera is very close to the city, but only the roof of the main hall suffered damage in the atomic bombing. Many survivors took shelter here. It is said that Buddha and pure water comforted them. The main hall of the temple was rebuilt over 20 years after the war.

On the temple grounds lies a monument to the victims of Auschwitz Concentration Camp. The triangular place shows a Jewish star. The lampshade suspended above the monument is actually an urn which carried ashes of the victims. 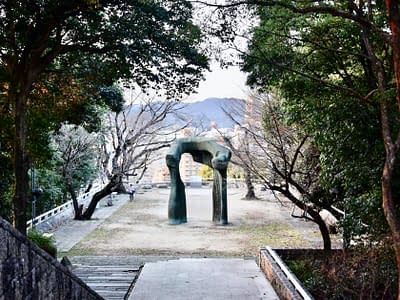 Hijiyama is a large 70-meter-high hill located about one kilometer south of Hiroshima Station. The entire hill is a park. You can enjoy fantastic views of Hiroshima City from Hijiyama.

In spring, about 1,300 cherry trees come into bloom here. This makes Hijiyama a famous spot for Ohanami, or “cherry blossom viewing picnics.” A lot of people come here every spring to enjoy this tradition.

Hijiyama also contains the Hiroshima Museum of Contemporary Art, and the Hiroshima City Manga (graphic novel) Library. There is also the Radiation Effects Research Foundation (RERF, formerly ABCC). The US military first established the ABCC to study the effect of the A-Bombing on human health. Today, it operates under the joint control of the US and Japan. An Army Cemetery lies just south of the RERF. From its vantage point, you can see Miyajima and Ninoshima Islands. 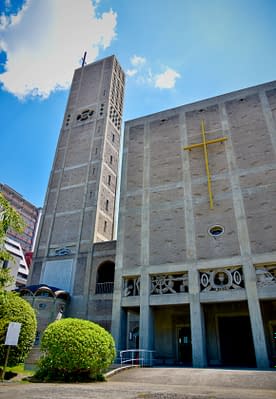 The Memorial Cathedral for World Peace, or Noboricho Catholic Church, is an Important Cultural Property of Japan.

The original church was destroyed by the atomic bomb, but the parish priest, Father Hugo Lassalle from Germany, who was inside at the time, survived. After the war, he built a new church to mourn the victims. He hoped the new church would serve as a symbol of friendship and peace in the world. Thanks to Father Lassalle’s heartfelt appeal, donations poured in from around the globe. The construction of the cathedral started five years after the bombing, and concluded four years later, on August 6, 1954.

Father Lassalle hoped many Japanese people would visit the church, so the building design includes many Japanese features. For example, the ceiling lamps resemble lotus flowers. On the top of the tower, you can see a phoenix instead of the cross.

The church holds English Mass every Sunday. It also holds Mass in Portuguese. 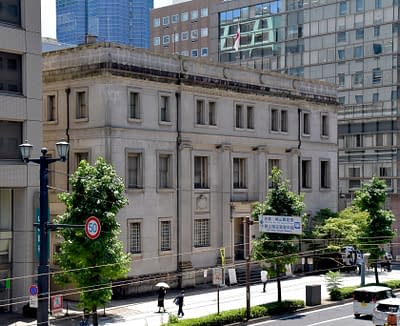 The former Hiroshima Branch of the Bank of Japan is one of the few remaining buildings exposed to the atomic bomb. It stands as a lasting reminder of the tragedy. The design quotes Greek and Roman architecture, with square columns ascending to volute capitals (the spiral scrolls at the top).

Due to the building’s strong concrete construction, it remains in excellent shape today.

Despite standing only 380 meters from the hypocenter, the first and second floors avoided severe damage thanks to the bank’s armored doors and 40-70 centimeter thick walls. The third floor burned completely, but the vault in the basement remained unscathed. The American-Made vault door is a meter thick, and bank employees had set barrels of water around the walls to protect the vault’s contents in the event of a firebombing.

All 42 people inside perished.

Bank operation began two days after the bombing, on August 8th. Twelve banks from around the city resumed partial service in the lobby of this building on that day. 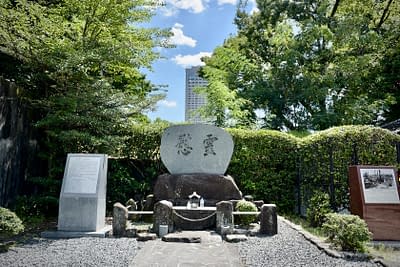 The Semi-underground Communication Bunker, which used to be a part of Hiroshima Castle, served as the Strategic Command Control Room of the military headquarters during the war. The bunker consisted of a thick concrete shell covered by soil and trees to conceal it from enemy planes.

In this bunker, schoolgirls were working as mobilized students under a military commander. They issued air-raid alerts and warnings, and also exchanged communication with military units in other areas.

The bunker lies 790 meters far from the hypocenter. Blast forces leveled most of the surrounding buildings. In the aftermath, one of the girls used the barely functioning military telephone system to deliver the first report of Hiroshima’s destruction.